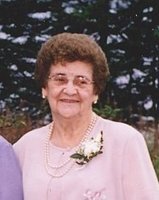 Sampson, Mary Irene – 98, Richmond Villa/Louisdale - Passed away peacefully on February 10, 2020, surrounded by her loving family. Born in Louisdale on November 7, 1921, she was the daughter of William and Mary Barbara (Marchand) Burns, the last of eleven children in this special family to leave us. Nanny’s life was rich in blessings, and we know that she adored us beyond measure. She shared our lives with love and laughter, and filled our bellies with lots of turkey dinners. We, her children and grandchildren, were so fortunate to have her close with us every day. She was there for all our big events, baptisms, first communions, graduations and weddings, followed by those of her great-grandchildren. She often lamented that she might not live long enough to see any of them, a statement that brought many laughs over the years. She was the strongest woman we know, and we were convinced that she would be with us forever. Nanny was a former member of the Fleur de Lis Senior’s Club and for 58 years a charter member of the St. Louis Catholic Women’s League. She modeled a life of devotion to Mary and her rosary beads were never far from her hands. We are all grateful that she was our Mother, Nanny, and Aunt, and we will miss her dearly. Irene is survived by son Willie, daughter Joan (Lucien Bona); grandchildren Joey, Glen (Beckie), Jamie (Kim), Stephanie (Chris), Craig (Jennifer), Crystal (Owen); great grandchildren Ashley, Brooklyn, Ryan, Carson, Trystyn, Jacob, Abby, Sara, and Jack; brother-in-law Cecil Landry, sister-in-law Helen Burns; former daughters-in-law, Dorothy MacMillan, Judy Forgeron; former granddaughter-in-law Anita Sampson; Ruth Matthews (mother of Isaac), and numerous nieces and nephews. Besides her parents, she was predeceased by her beloved husband of 60 years, Paul, son Carl, grandson Isaac Matthews, sisters May MacPhee, Celina Marchand, Delta Marchand, Eleanor Goyetche, Verona Landry, a sister in infancy, brothers Arthur, Willie, Norman, and Narcisse. We are grateful to Nanny’s second family, the nurses, caregivers and residents at the Richmond Villa, who we know loved their friend, ‘Mama’, and ‘Ma Tante’, like she was their own. Visitation will take place on Sunday, February 16, from 6:00 p.m. to 9:00 p.m. in the Glen Sampson Room. Mass of Christian Burial will be held on Monday, February 17, at 11:00 a.m. in St. Louis Church, Louisdale, with Father Duncan MacIsaac presiding. Burial at a later date in St. Louis Cemetery. A reception will follow in the St. Louis Parish Hall in Louisdale. In lieu of flowers, memorial donations may be made to the Richmond Villa Activity Fund or the St. Louis Parish Cemetery Fund. ‘That’s the way I suppose!’