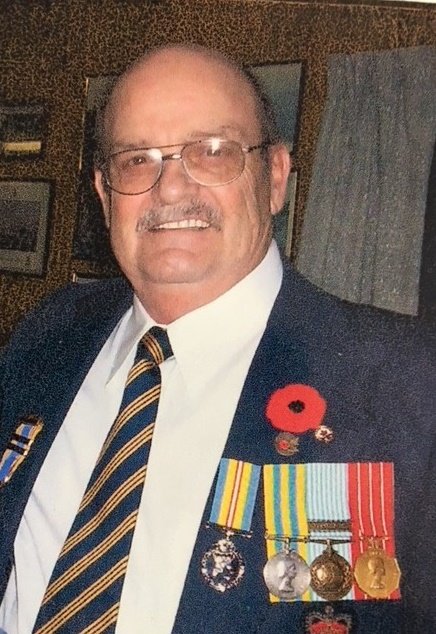 HILLIER CD, John Elmer “Jack” - Passed away peacefully surrounded by his loved ones that he laughed with, lived for and loved on March 10, 2018, at the age of 86, in the Strait Richmond Hospital.  Jack will be sadly missed by his children: daughters, Debra (Mark) Cooper, Havre Boucher; Joy (Vaughn) Resch, Fort McMurray, AB, his sons, Steve Hillier, Athabasca, AB; Brad (Cheri) Hillier, Fort McMurray, AB, his grandchildren: Uriah, Oakley, Nicholas, Jennifer, Todd, Ben, Dylan and Jacob; by his great grandchildren: Chase, Coen, Izzie, Kane, Logan, Lucas, Aila and Kingston. He was predeceased by his loving wife Verona (Nona), who he was married to for 62 yrs. and by his parents, Elmer and Ruby Hillier, his brothers: Robert and Norman Hillier and his sister Joy Butler-Henderson. Jack was born on December 13, 1931, at home in Lemington, ON. He worked with his father on their tobacco farm, until he joined the Royal Canadian Navy on August 30, 1950. He was a Korean War veteran and he loved his time served in the navy until January 23, 1972, when he retired.  After his career in the military, he went on to work for the Nova Scotia Power Commission in Port Hawksbury, NS, for an additional 19 years.  He retired full time after that and spent the rest of his life in Louisdale, Cape Breton. Jack was a member of the Royal Canadian Legion, Branch Number 47 out of Grand Anse for 45 yrs. and was also a past member of the Louisdale Lions club. Jack was smart, sharp, witty, well informed and he loved a good debate. He never stopped loving his wife and children and he was blessed to be cared for by his brother and sister in laws during his widowed years.  A special thanks goes out to the AWESOME, KIND and DEDICATED nurses in the Emergency Ward at the Straight Richmond Hospital. Your care went above and beyond and will never be forgotten. Visitation will take place on March 15th from 6 – 9 pm in the Glen Sampson Room in Louisdale.  A celebration of his life will be held on March 16th at 3 pm in the St. Louis Church in Louisdale with Rev. Joe MacKenzie officiating. Reception will follow in the St. Louis Parish Hall in Louisdale. Memorial donations can be made to Strait Richmond Hospital. Funeral arrangements are entrusted to C.H. Boudreau Funeral Home Ltd. in Arichat.  To send words of comfort to the family or to light a candle in memory of Jack, please visit: www.chboudreau.com.