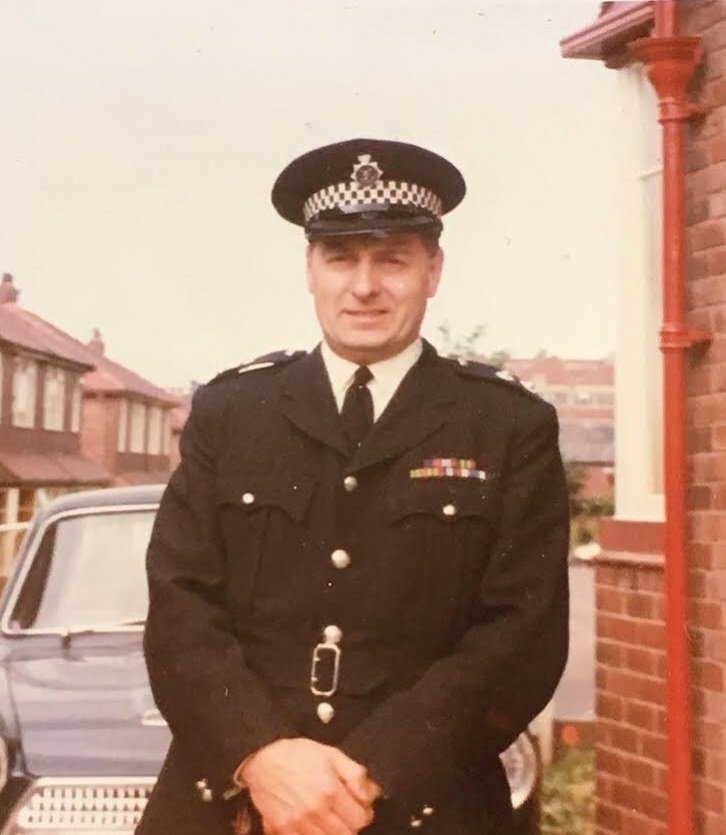 Myself, Bernard Sharrocks ,Peter Leigh, Terry Simms and Tony Gedrodge raised our glasses to our ex colleague and friend. We meet weekly at a local hostilery here in Stockport and spoke about our memories of Bill, all of which included the times when we, who all joined in the early 60's, were all helped in some way by this experienced and greatly respected officer. Rest in Peace Bill, you will always be remembered.

Sorry for your loss,condolences to family and friends. Bill was a great neighbor always a wave.Thoughts and prayers are with you all.

So sorry to learn of Bill Adie’s passing and apologies for this rather late tribute.

I knew Bill from1950 when I joined the Stockport County Borough force, where he was already serving as PC 35 William Percival Adie and he showed me around a number of beats in those early days and much later worked at the same time in the C.I.D., he by then being a Det. Sergeant.

A shrewd and most competent policeman in all aspects of the job. Bill was always well liked, respected and possessed a somewhat reserved and most pleasant disposition, combined with a dry ready wit and sense of humour. These worthy traits coming to the fore in particular on social occasions when we all tended to let “our hair down”.

The current winters blast prompts me to mention one memory of a time in the early 50’s when Bill on night duty came across a burglary on his patch and subsequently followed footsteps in th snow, a considerable distance to the culprits home in South Reddish, where he arrested a most surprised villain. A feat in not as simple as it sounds and turned out a most significant case involving many other offences the same person had committed. Just a sample of Bill Adie’s perseverance and tenacity, which indeed became his trademark throughout his service.

I am more than grateful that we spoke just prior to Christmas and exchanged some happy and (not so happy) experiences, with the intention of further contact in the future, which sadly, will not now happen.

In conclusion, I can pay no greater tribute to Bill than to write with true sincerity, that over the years I have heard many comments in his favour, but, never an ill word uttered to his detriment.

Carmen and my condolences to the family.

Thinking of my Uncle Bill with a heart full of love and everlasting memories.My fondest memory"You should eat a bowl of cereal before bed,you don't want to wake up during the night hungry". Rest in peace Uncle Bill you are now reunited with Auntie Una

My condolences to Bill’s family. I have fond memories of Bill when learning my trade in the Stockport Borough CID office. He and my late husband shared a desk ( not the luxury of one’s own those days ) and rivalled for the most ingenious write off. He was a total gentleman with a wonderfully dry sense of humour and always the professional. Rest In Peace Bill.

My sincere condolences at Bill's passing, he was an extremely sound guy to work with, both efficient and considerate. A good friend and a good policeman, a great loss to us all.

We were saddened to learn of Bill's passing but pleased he did not suffer too long. We were colleagues at Stockport, Cheshire Constabulary and GMP. all those years ago. He was a good man, well liked and a very efficient detective. May we send our deepest sympathy to his family and Wayne Brabin; who was instrumental in our linking up with Bill again in 2018. It made him very happy to talk about old times and past colleagues we served with; thank you Wayne.

My fondest memory of Bill was at our C.I.D. dinners ( with and without our wives) he would always entertain us with his favourite song, "Red sails in the sunset". I still remember him and get a great kick when I play my record of Ken Griffin on the organ. I told him of this when we last spoke at the end of 2018, he confirmed it was still his favourite. I can hardly believe that its 45 years since we worked together at Stockport!

I was saddened to hear of Bills passing, we worked together in the Police at Stockport, Cheshire over 50 years ago. Bill was a kind and generous man and a good policeman, I had made contact with him in recent times and enjoyed our contact both by letter and phone. Bill was a real gentleman. Rest in Peace Bill.

Our deepest condolences to all his family