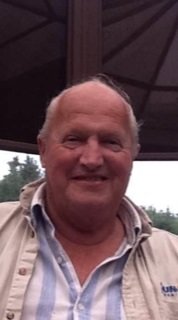 Please share a memory of George Allen to include in a keepsake book for family and friends.
View Tribute Book
It is with sadness that we announce the passing of George Allen Mauger in St. Martha’s Hospital in Antigonish on April 26. George was born in Cap la Ronde in 1941 to Fred and Caroline (LeVesconte) Mauger. He graduated from St. Peter’s High School and the Nova Scotia Agriculture College, after which he returned to join his father on the farm. He shortly learned that his interests lay more in forestry and the operation of heavy machinery. He spent many hours logging around Isle Madame and his proficiency with a backhoe meant he was much in demand on various construction projects. For a time, he and his wife owned and operated the Kimberley Ann restaurant and motel in Arichat. In 1980 he and his family relocated to Calgary where he operated heavy equipment for Qualico Construction. After 4 four years he became lonesome for Cape Breton and the family returned to Cap la Ronde where he renewed his activities in the forest industry, from which he retired five years ago, and moved to live with his daughter, Kimberley in West Bay. He did not forget his old friends on Isle Madame and travelled almost daily to join them for their coffee club. George had a mild-mannered personality and a wry sense of humour. He loved his children and grandchildren unconditionally. He is survived by daughters Kimberly (Brian Maltby) Mauger, Olla (Derek) Samson, June (the late Kenny) Fougere, Wanda (Elliot) Boudreau, Carolyn (Pat Terrio) DeCoste, Charmaine (Wayne Boudreau) DeCoste, Marlaine (George) Campbell, Lisa (Craig) Melton and Cheryl (Jason) Miller as well as extended family Diane, Darlene, and Tanya DeCoste, and sons Allen (Cheryl) Fougere, Ron Fewer and Daren Fewer. He is also survived by grandchildren, Taylor, Emma, Colton, Lance, Chase, Logan, Scott, Joshua, Elisha, Crystal, Holly, Cortland and Corson, Braeden and Ryder, Nathan, Tyler, Stephen and Ashley, Mickey Newman-Fewer. He is also survived by his wife, Ann (Samson) and his sister Eva (Doug) Landry. He was predeceased by his parents and his son-in-law, Kenny Fougere. Cremation has taken place. A funeral service will be held at a later date, followed by a celebration of life. The family wishes to express sincere gratitude to Dr. Deroche and nurses of the Strait Richmond Hospital ER Department and to the doctors and nurses of the St. Martha’s ICU, especially Kim and Chelsey, for their tender care and compassion to George in his last days. Donations in memory of George may be made to Strait Richmond Hospital Foundation or to the charity of your choice. Funeral arrangements have been entrusted to the C.H. Boudreau Funeral Home Ltd. in Arichat. To send words of comfort to the family or to light a candle in memory of George, please visit www.chboudreau.com.

A Memorial Tree was planted for George Allen
We are deeply sorry for your loss ~ the staff at C.H. Boudreau Funeral Home
Join in honoring their life - plant a memorial tree
Online Memory & Photo Sharing Event
Online Event
About this Event

Look inside to read what others have shared
Family and friends are coming together online to create a special keepsake. Every memory left on the online obituary will be automatically included in this book.
View Tribute Book
Share Your Memory of
George Allen
Upload Your Memory View All Memories
Be the first to upload a memory!
Share A Memory
Plant a Tree