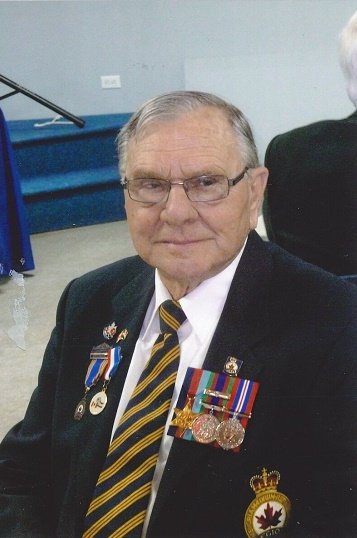 Please share a memory of Joseph Harold to include in a keepsake book for family and friends.
View Tribute Book
It is with great sadness that we announce the passing of Harold Joseph Martell, 94 of Arichat formerly of Petit de Grat that occurred at his residence in St. Anne Centre in Arichat on May 24, 2020. Born October 2, 1925 in Poulamon, he was the son of the late James and Helen Jane (MacPhee) Martell. Harold was a Veteran of W.W.II serving in the Army N.W.N.S. regiment. He was involved in the liberation of Holland in 1945 and was presented with the Dutch Medal. After he served with the North N.S. Highlanders in Germany until he was discharged in July 1946. Harold was awarded the 1939-1945 Medal: France and Germany Star and the Canadian Volunteer Service Medal and Clasp. He also served in the Canadian Army Reserve as a Bdr. From September 1950 till December 1952. Harold was active in the labor movement from 1953 to 1986. He was Secretary and President of Local 361 Brewery and Soft Drinks Workers Union; was international rep-of same Union from 1962 to 1974. He then became National Rep. with the Canadian Union of Public Employees from 1974 up until his retirement in January 1986. He was an active member of several credit unions, the Co-op movement, and several legions, the latest being the Royal Canadian Legion Branch 150, Arichat, Lawrence Kavanaugh Council 4607, West Arichat, the CCF and NDP. He was also a candidate in Halifax West in two elections. He loved dancing and playing cards especially a good game of poker. He truly enjoyed his many gatherings with his friends on "the stretch". He was not a man of many words but was a true friend to anyone who had the opportunity to know him. He is survived by his second wife, Olive (Boudreau) Martell, Petit de Grat; daughters, Judy Organ (Eddy), Deborah Ann Martell, both of Dartmouth; grandchildren, Craig, Darren, Robyn; great-grandchildren, Ileigh, Baylin, Gwen, Arianna; sister Margaret Goyetche, Spryfield; sister in law Joyce Martell, Halifax. He was predeceased by his first wife, Rita Elizabeth (Goyetche) Martell; son Harold Norbert; sister Mildred; brothers, Donald, Henry, Alfred, Albert. By request and due to Covid-19, there will be no visitation. Cremation has taken place. A private family graveside service will be held in St. Anselin Cemetery in West Chezzetcook on Wednesday, June 17, 2020, at 1:30 pm with Rev. Vincent Onyekelu presiding. Legion Tribute will be held following the service. To send words of comfort to the family or to light a candle in memory of Harold, please visit www.chboudreau.com

A Memorial Tree was planted for Joseph Harold
We are deeply sorry for your loss ~ the staff at C.H. Boudreau Funeral Home
Join in honoring their life - plant a memorial tree
Online Memory & Photo Sharing Event
Online Event
About this Event

Look inside to read what others have shared
Family and friends are coming together online to create a special keepsake. Every memory left on the online obituary will be automatically included in this book.
View Tribute Book
Share Your Memory of
Joseph Harold
Upload Your Memory View All Memories
Be the first to upload a memory!
Share A Memory
Plant a Tree