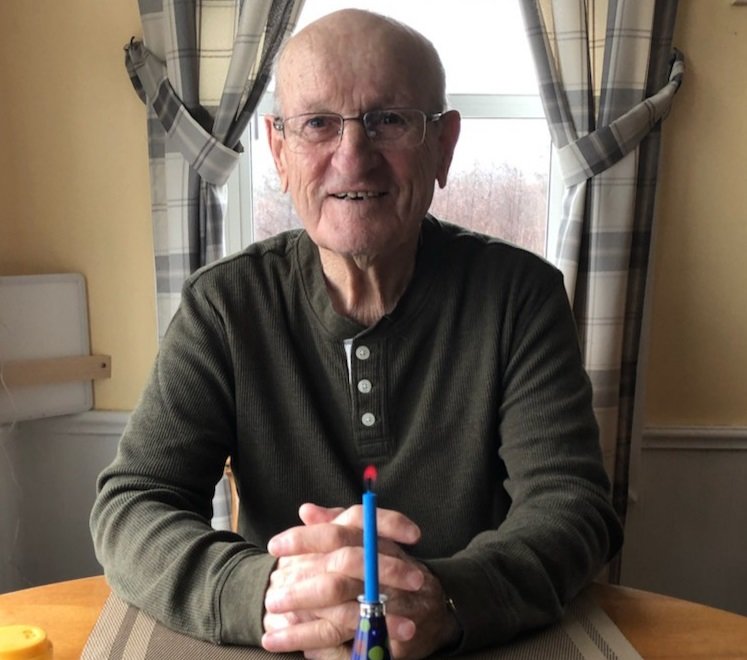 Please share a memory of Peter Amable to include in a keepsake book for family and friends.
View Tribute Book
BOURQUE, Peter Amable - passed peacefully at home in Port Royal, held in love by his wife, Margaret (Peggy), on Saturday April 17, 2021. Peter was born on December 13, 1932 in River Bourgeois, son of the late Ida Mae (Landry) and Amable Bourque. Peter worked for Nova Scotia Power as a land surveyor for 38 years until his retirement in 1988. He honed his skills as a ‘jack of all trades’ by being quick to lend a hand to anyone who needed help doing renovations and by building lawn chairs, lighthouses and bird houses in his backyard shop. Peter always kept busy, and spent much time playing hockey, umpiring baseball games, four wheeling, boating and fishing. In his later years, he surprised even himself as he took up coloring and painting and the odd ‘go round’ on the poker machines. He was always the first to arrive and the last to leave, whether it was a job site or a party at which he was not opposed to a stiff drink of rum and acting the fool to get a laugh out of people. Most of all, ‘Papa’ loved visiting, especially with his grandchildren. His friendliness and humour will be missed by all who knew and loved him. Peter is survived by his beloved wife of 48 years, Peggy (LeBlanc); his daughter Michelle Theriault (Darin LeBlanc) and grandchildren, Marielle Theriault and Micheline Theriault; his daughter Nicole Bourque (Jason Boudreau) and grandchildren, Christian Bourque and Aidan Boudreau; stepson Larry Keating (Jennifer Ferguson) and grandchildren, Darby Keating (Corson Fougere) and great-granddaughter Laine Fougere, Cole Keating and Candice Green; stepson, Anthony Keating; siblings Angelina Digout, Monica (Stanley) McPhee, and Patrick (Diane) Bourque; special sister-in-law Patsy Bourque; and numerous nieces and nephews. Peter was predeceased by his son-in-law, Darren Theriault; his parents; and siblings, Gilbert, Ellen, Tony, Wilfred, Abraham, Lorraine, Louis, Vincent, Josephine and Clifford (in infancy). A private mass of Christian Burial for Peter will be held in Our Lady of Assumption Roman Catholic Church in Arichat, with Reverend John Baptiste DeCoste officiating. Burial to be held at a later date when Covid - 19 rules and regulations makes it safe to do so. Memorial donations may be made to Strait Richmond Hospital Palliative Care or to a charity of one’s choice. To send words of comfort to the family or to light a candle in memory of Peter, please visit www.chboudreau.com
Saturday
2
July

Look inside to read what others have shared
Family and friends are coming together online to create a special keepsake. Every memory left on the online obituary will be automatically included in this book.
View Tribute Book
Share Your Memory of
Peter Amable
Upload Your Memory View All Memories
Be the first to upload a memory!
Share A Memory
Plant a Tree