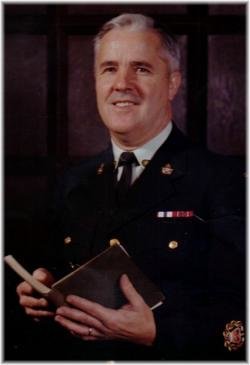 Please share a memory of Joseph Michael Clement to include in a keepsake book for family and friends.
View Tribute Book
August 13, 1933 - January 28, 2020 Joseph Michael Clement Marchand, formerly of Petit de Grat, passed away peacefully surrounded by his loving family and is now free from the challenges of living with dementia. Dad was the eldest child of the late Robert and Bernadette (Boudreau) Marchand. He was a faithful and devoted husband to Marie Lenore (Madden) for 63 years and a kind and patient father to his five children. Dad was a respected member of the Canadian Forces for 34 years achieving the rank of Master Warrant Officer. Upon retirement from the military he accepted a position within NATO in Geilenkirchen, Germany. In 1990 he and mom returned to Barrie, Ontario to enjoy many years working in their beautiful gardens and the company of their many friends and family. Joe and Marie moved to Nova Scotia in the fall of 2014 and lived in Berwick for their remaining years. Our dad is probably best known for his positive, easy going, friendly personality. He enjoyed making people laugh and always had a joke to tell. He enjoyed sports and played baseball and broomball in his younger years. Family time always included a good game of cribbage. Dad displayed his great strength of character as he supported our mom during her many years dealing with kidney disease and home hemodialysis. He is survived by children, Angela Fraser (Vern), Berwick; Laura Morse (Brian), Berwick; Michael (Lonni), Courtice, ON; Janice Archibald (Stuart), Houston, Texas; David (Kim), Barrie, ON; loving grandpa to Meghan Banks (Kevin), David Fulton (Sara), Chris Fraser, Nick Fraser (Carrie), Sarah Woodworth (Jeff), Ian Morse, Jane Beaton (Kyle), Mark Morse (Melanie), Lauren Davidson (Chad), Gregory and Ann Folker, Ian Archibald, Jacob, Jordan and Jenna Marchand; many great grandchildren, brothers, Peter, Leo (Raymonde); sister, Marie Fraser (Brian); sister-in-law, Susan Marchand; brothers-in-law, John Meagher, Bob Teed, Fred Madden (Denny); many nieces and nephews. Joe was predeceased by his wife, Marie in March 2019; brother, Alzear and sisters, Leona Meagher and Anne Teed. Many thanks to Dr. Robin Bustin and the staff of Grand View Manor who cared for dad with such loving compassion. A funeral mass will be held in St. Joseph's Church in Petit de Grat on Monday, August 23rd at 2pm with Rev. Jean Battiste-DeCoste presiding. Burial to follow in Our Lady of Assumption Cemetery in Arichat. A reception will be held following the committal at the Clairestone Inn, 2375 Hwy 206, Arichat, N.S. Donations in memory may be made to Grand View Manor, Berwick or the Alzheimer Society of Nova Scotia. Funeral arrangements have been entrusted to C.H.Boudreau Funeral Home Ltd in Arichat.
Monday
23
August

Look inside to read what others have shared
Family and friends are coming together online to create a special keepsake. Every memory left on the online obituary will be automatically included in this book.
View Tribute Book
Share Your Memory of
Joseph Michael Clement
Upload Your Memory View All Memories
Be the first to upload a memory!
Share A Memory
Plant a Tree