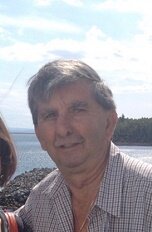 Please share a memory of Joseph Art to include in a keepsake book for family and friends.
View Tribute Book
It is with deep sadness and broken hearts that we announce the passing of our precious husband, dad, papa, brother, uncle (nok), and friend Arthur (Art) Joseph Marchand. Art was born on July 16, 1942 to the late Rose Boudreau and Arthur Marchand senior. In his early years, Art worked at the Port Hawkesbury Heavy Water Plant where he became lead foreman of the Sheet Metal Shop and worked in this position for the majority of his work life. It was there where he made his imprint in his craft and developed work friendships that lasted a lifetime. With the closing of the Heavy Water Plant, Art moved on to work at the Port Hawkesbury Pulp Mill until his retirement. Art had many passions in life, but none bigger than Saturday morning in the woods with the power saw or at home in his woodpile. Art served as a member of the Louisdale Lions Club for the majority of his adult life, serving in many senior positions and as King Lion for a term. Art’s skills as a car driver were highly regarded in the Louisdale community as he would often be requested to chauffeur the Bride and Groom throughout Louisdale and neighboring communities. He took such pride in this role! Art was an avid card player and those who knew him well would attest to his skillsets and trickery. With all these talents, there was none greater than his talent of dance. He and his wife, Edna, ripped up dance floors in the local halls and legions each Saturday displaying their immense “Jive” talents to many onlookers. Art is survived by his wife of 57 years, Edna. He is also survived by his children Ken (Terri), Fonda (Jeff) and Marie (Kevin), beautiful grandchildren Kirsten, Cody, Olivia, Jace, Nick, and Lacey and great-grandchildren Easton and Pasley. They brought him so much joy in life. He is also survived by his brother Wilfred (Claire) and brother-in-law Joe and many nieces and nephews. He was predeceased by his parents, sister Muriel (Joe), brother-in- laws Edgar, Frank, George, Jimmy and Louie. The family would like to extend a heartfelt thank you to the staff of the Richmond Villa from house-keeping, to the kitchen staff, personal care workers and Dr. Collins who helped with dad daily. There are no words that can express how grateful we are for the care, kindness, compassion and love you have given to Art and Edna throughout the last 4 years. You will forever be in our memory! Cremation has taken place. Visitation will be held in the Glen Sampson Room in Louisdale on Sunday evening, Sept. 26th, 6-9pm. Funeral Mass to Celebrate the Life of Art will be held Monday morning, Sept. 27th at 11am at St, Louis Church, Louisdale with Rev. Duncan MacIsaac officiating. Burial at a later date in St. Louis Parish Cemetery, Louisdale. Memorial donations can be made to the Richmond Villa or to the charity of one’s choice. Funeral arrangements are entrusted to C.H. Boudreau Funeral Home Ltd., Arichat. To send words of comfort to the family, please visit, www.chboudreau.com
Sunday
26
September

Look inside to read what others have shared
Family and friends are coming together online to create a special keepsake. Every memory left on the online obituary will be automatically included in this book.
View Tribute Book
Share Your Memory of
Joseph Art
Upload Your Memory View All Memories
Be the first to upload a memory!
Share A Memory
Plant a Tree