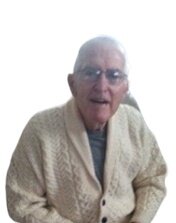 Please share a memory of Robert Arnold to include in a keepsake book for family and friends.
View Tribute Book
REID, Robert Arnold, 82, of St. Peter’s/Toronto, ON It is with deep sadness that we announce the passing of Robert Arnold Reid of St. Peter’s, N.S., formerly of Toronto, ON which occurred at the Richmond Villa in St. Peter’s on January 6, 2023. Born in Toronto, ON. On November 23, 1940, he was the son of William and Doris Evelyn (Williamson) Reid. Robert is survived by his loving wife the former Jean Dorothy (McClay) Reid of 57 years; son Robert (Andrea) Reid, Whitby, ON; grandchildren Danny, Nena, Krista, Kate, and Gracie; great-grandchildren Ethan, Layla, Addison, Taylor, and Andie; brother John Reid, Truro. Cremation has taken place. There will be no visitation or funeral mass per request. A private burial will take place later in Ontario. Funeral arrangements are entrusted to C. H. Boudreau Funeral Home Limited, Arichat, N.S. Tributes, words of comfort, and memories of Robert may be shared with the family at www.chboudreau.com

A Memorial Tree was planted for Robert Arnold
We are deeply sorry for your loss ~ the staff at C.H. Boudreau Funeral Home
Join in honoring their life - plant a memorial tree
Online Memory & Photo Sharing Event
Online Event
About this Event

Look inside to read what others have shared
Family and friends are coming together online to create a special keepsake. Every memory left on the online obituary will be automatically included in this book.
View Tribute Book
Share Your Memory of
Robert Arnold
Upload Your Memory View All Memories
Be the first to upload a memory!
Share A Memory
Plant a Tree