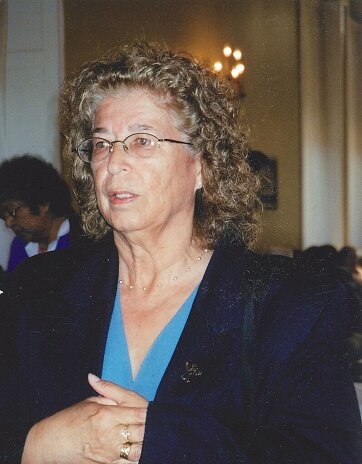 Please share a memory of Jean Doris to include in a keepsake book for family and friends.
View Tribute Book
It is with heavy hearts that we the family must announce the passing of our mom, Jean Doris Doucette of Potlotek on January 31, 2022, at the age of 84, at her home in Potlotek. Born, August 25, 1937, she was the daughter of the late Richard and Esther (Paul) Johnson. Education played a big role for our mom, she was the first student from Potlotek to graduate from High School and was a survivor of Indian Day School. She took great pride in knowing all 12 of her children graduated from high school and continued with their post-secondary education. She was on the steering committee which formed the Potlotek Board of Education and served as the first Chairperson. Jean along with her husband, Chief Noel Doucette, owned and operated several businesses which included: an arcade/convenience store, Doucette’s Christmas Wreaths, and Trees, and Indian Lake Handicrafts & Variety for several years. She was employed for many years as a Janitor for the Chapel Island Band and as a medical Carrier until her retirement. Jean served the Immaculate Conception Church as a Eucharistic Minister. She was an active and founding member of the Potlotek Rosary Group. Jean along with her husband were the contributing donors for the completion of the Blessed Kateri Tekakwitha Chapel in Potlotek. Above all Jean was a homemaker, Mother, and Mummum which she took great pride in. She will be sadly missed by her children: Noel Doucette of Potlotek, Laurie Doucette (Clayton) of Membertou, Charles Doucette (Lynne), Denise Doucette, Natalie Doucette (William), Keptin Francis Doucette (Lori), Yvonne Doucette (Darren), Giselle Doucette, Noelle Doucette, Quentin Doucette, and Rita Doucette, all of Potlotek. As well as Her Grandchildren Edna Doucette (Brad) of Potlotek and James Doucette (Chenise) of Tatamagouche, whom she raised. 29 grandchildren, 33 great-grandchildren, 1 great-great-grandchild, and 6 godchildren. As well as her brothers, sisters, In-Laws, and many nieces and nephews. Besides her parents, Jean was predeceased by her husband Chief Noel Doucette; son, Cecil Doucette; sisters, Alfreda Johnson, Virginia Simms, Sarah Denny, Pauline Gould, brothers, Edward Johnson, Arthur Johnson, Danny Johnson, Wilfred Johnson, and Henry Johnson. Her Godparents John N. and Margaret Paul. Visitation will be held in her residence at 12223 Highway 4 in Potlotek on February 10th, 2022, from 4 pm till 10am February 12th, 2022 Funeral Mass will be celebrated in the Immaculate Conception Church, Barra Head on February 12th, 2022 at 10:30 am with Rev. Duncan MacIsaac officiating. Burial will take place in the Immaculate Conception Cemetery, Barra Head In compliance with Nova Scotia's COVID-19 public health regulations, proof of double vaccination and a picture ID must be shown to attend the visitation and funeral. The Funeral will be attended by invitation only. Funeral arrangements are entrusted to C.H. Boudreau Funeral Home Ltd., Arichat. To send words of comfort to the family, please visit www.chboudreau.com
Thursday
10
February

Look inside to read what others have shared
Family and friends are coming together online to create a special keepsake. Every memory left on the online obituary will be automatically included in this book.
View Tribute Book
Share Your Memory of
Jean Doris
Upload Your Memory View All Memories
Be the first to upload a memory!
Share A Memory
Plant a Tree